About Me Concert I Love Music My Adventures Uncategorized 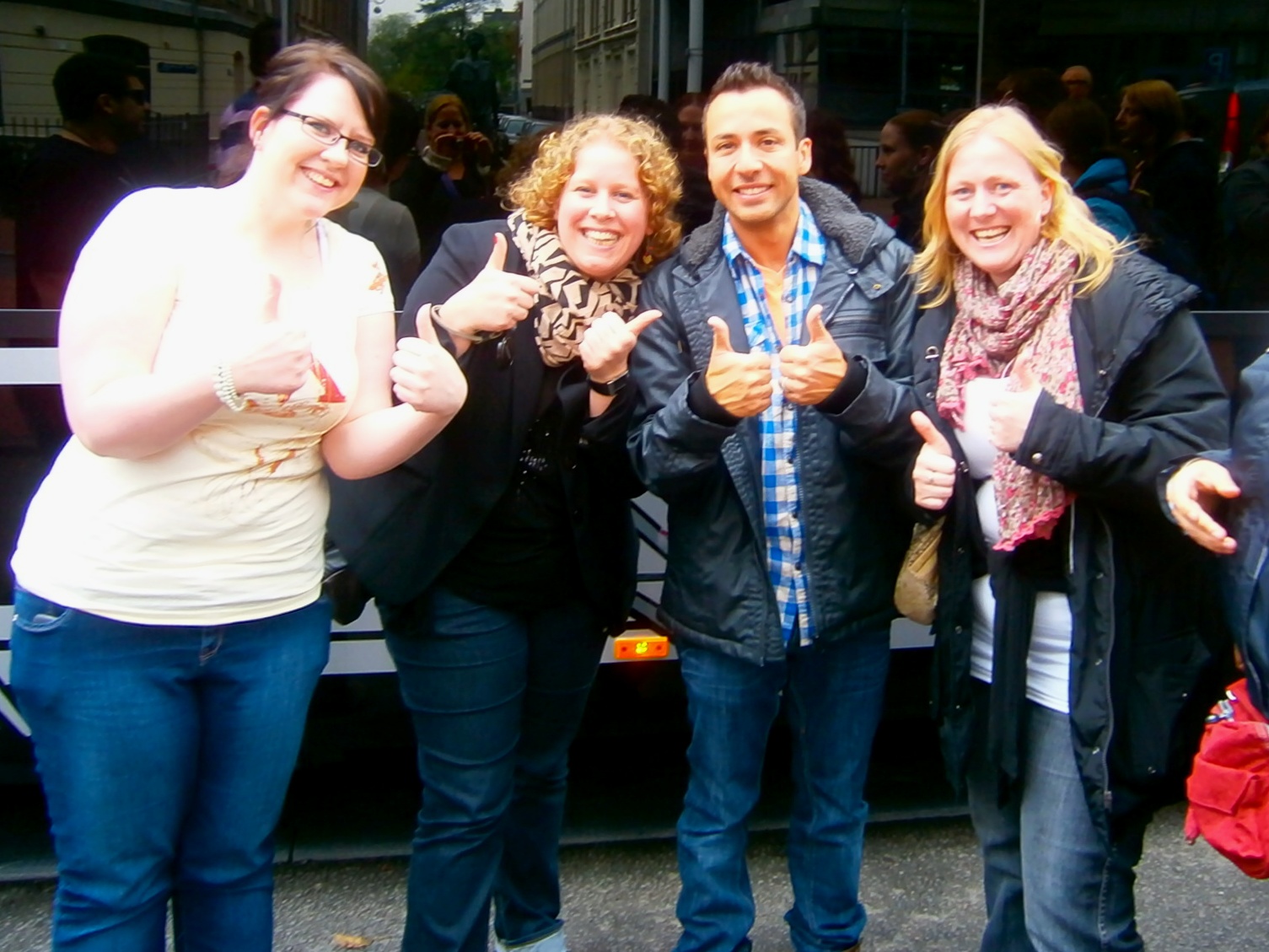 Following Nick Carter through the streets of Amsterdam on Queensday

Right after we landed in Amsterdam when we came from our London trip our adventure continued in our own country, Holland. Because we celebrated our Queen´s Birthday that day everyone was dressed in our national color orange and also red, white and blue (the colors of our flag). It’s the biggest party in Holland and esp. in Amsterdam all the streets are filled with orange people celebrating and having fun.

Having so much fun, with Nick (Orange bandana) in the back

We knew that the boys would have their day off here so we really wanted to celebrate this special day with them. When we arrived at the airport our friend Nettie picked us up by train. We drove the the Hague to pick up our car and drove straight to Amsterdam. When we arrived at the hotel were the BSB’s stayed we already saw a few of our friends and also saw Nick Carter with his girlfriend and Brian Littrell with his family. They seemed to be having a great time.

Crazy Craving Through The Streets Of Amsterdam

We found ourselves a nice hotel 2 streets away from where the boys stayed, so we checked in and had a good lunch. Because everyone was drinking and partying on the streets we joined them awhile waiting outside the hotel of the boys. There also was a big party with many Dutch celebrities which we also met when they came outside. We told them that we were waiting for them. We had so much fun and couldn’t stop laughing after a few drinks…It was hilarious. The other fans probably thought that we were insane, but we just had a blast.

In the afternoon Nick tweeted that he was in a bar somewhere and invited us to join him. So we went to the bar and got inside. Nick was there with his girlfriend and some other crew members smoking water pipes. Because the bar was so small and we didn’t want to be standing right in front of him we went outside for a bit. Then he came outside and we started to follow him through the orange colored streets full of drunk people. Because we had enough to drink we thought this was so super funny and ridiculous, following a Backstreet Boys through the streets of Amsterdam together with 20 other fans. We looked like a swarm of bees behind his honey ass. We laughed so hard while they stopped for some hotdogs, poffertjes (Dutch mini pancakes) and then they stopped at a restaurant. How much food can you eat?! They were calling with Howie to meet up somewhere but he was at the other side of the town, so it was to far and to crowded to get to them. Too bad, because we were there following him so he could lead us to Howie.

Me, Brian & Linda in Amsterdam

After they finished dinner we walked with them for a little while and then we split up. We went back to the hotel and got some well needed sleep. What a crazy day, best Queensday ever if you’d ask me!

Linda being super excited after her first solo pic with Brian

The next day we had to take care of some business and in the afternoon we went back to the hotel of the boys. We met up with some of our friends who we hadn’t seen on the tour before, so it was great to finally see them. The boys  came out a few minutes after that to take pictures with us. They really took a lot of time. I managed to get 2 pictures with Brian and 2 with Howie (doing the Howie D Pose with his @TeamHowie_D which is us) and he didn’t even ask which pose we meant. It was so cute. I also took another pic with Nick and AJ unfortunately didn’t take that many pictures. (There was also this paparazzi guy who managed to take a picture of us with Howie and posted it in this Dutch magazine under the HOT or NOT section…we ended up being ‘NOT’ because we were old fans with old Backstreet Boys…well guess what…people get older in 19 years….so what’s the point!?? They didn’t even spell Backstreet Boys right, freaking losers!) 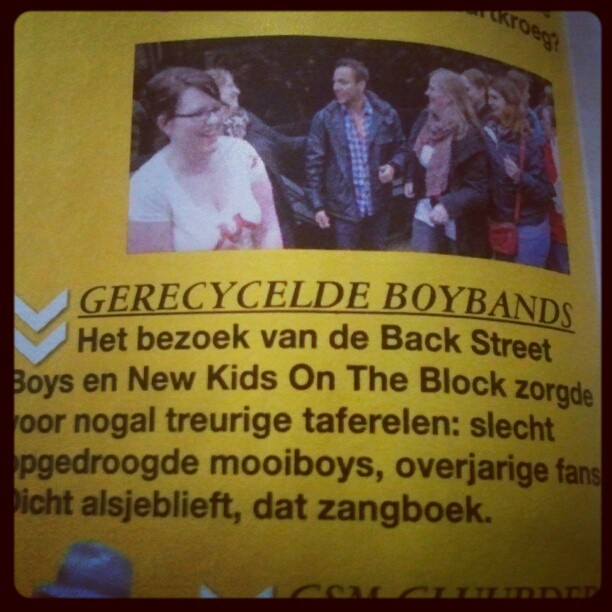 Us in a Dutch magazine being in the NOT topic

After we took all the pictures we all drove to Rotterdam to meet up with my Mom and my friend Femke who also came with us to the concert. We ate some nice diner together and went back to the venue. This was my Mom’s first ever concert of the Backstreet Boys. After she had seen her daughter go to so many concerts for 16 years it was about time for her to finally see what I meant with their shows and why I would see it 14 times. She was really excited and happy to be there and be with all my friends.

Having diner with all the girls before the concert

Inside the venue we found ourselves a great spot near the long catwalk of the stage. The show started and we were all singing along with all the cheesy New Kids songs. During the song I’ll Never Break Your Heart the boys always take 4 fans on stage to serenade the song to. Me and Eveline made 3 big banners saying ‘Brian, Please Pick Her Mom’, ‘Brian, Please Pick My Mom’ and ‘Please Pick Me’. While they were looking at the fans to pick someone Brian surprisingly looked at the banners and said that my Mom could come on stage! OMG we were all jumping and screaming and send my mom on stage.

It was hilarious to see my Mom on stage with Brian singing to her that he would rather Die, than live without her. They kept on talking to each other during the whole song. It made me wonder what they were talking about, probably gossiping about me and my friends. At the end of the song they all get down on one knee and sing the some lines a-Capella. After that they hug and kiss goodbye and the fans get of the stage. Well, that’s how it’s suppose to go. but my Mom decided it’s wasn’t her time yet to go offstage, so she kept on chatting with Brian and even though the next song had already started she didn’t get of stage. we were all laughing and yelling at her to get of stage, it was hilarious! Then finally she came of stage and back to us with a big smile on her face. She had so much fun and was totally blown away.

She did chat to Brian about me saying to him ‘I’m Janske’s mom and she’s a big fan and follows you everywhere’…they really had fun on stage and we taped the whole thing and many many pics. The rest of the concert was so much fun. My Mom was over the moon, Brian kept waving at us during the whole show and all the other boys gave us some attention as well.

I had a blast and loved that finally my Mom could experience what I’m up to when I’m on tour with my friends. After the show many people came up to me saying, was that your Mom, she was hilarious and didn’t want to get of the stage…yep that’s my Mom!

After the show I went back home with my Mom and my friend Femke and all the way back home we talked about everything that just happened and about the fun we’ve had during the show. This was one of those nights that I’ll NEVER forget!

My Mom & I After She Came Of Stage

Belgium, are you ready to PARTYYY??

So the next day I took the train to Breda to meet up with Nettie & Eveline to drive to Antwerp in Belgium together. When we arrived there we saw our friends Nathalie and Karin and went to the backstage parking lot of the venue to see if we could see the boys. We only saw Howie there, we was happy to see us and shake our hands. Because the weather was horrible we decided to go for diner at a local pizza restaurant. what a crappy place, crappy service, horrible hygiene, just terrible. Luckily my pizza tasted nice though. After diner we stayed in our cars because it was raining outside and waited there until the door would open half an hour later. We went inside and we had row 4 and row 2 tickets to see the show. When we got inside we found out that there wasn’t a row 1 in front of us, so we had row 3 and row 1 tickets instead.

Oh My God We’re Back Again!

The show was fantastic and we had so much contact with all 9 boys! They all gave us smiles, were blowing kisses and waving at us. it was amazing. The show was really good, like always and we’ve had a good time!

Next stop Germany… to be continued! 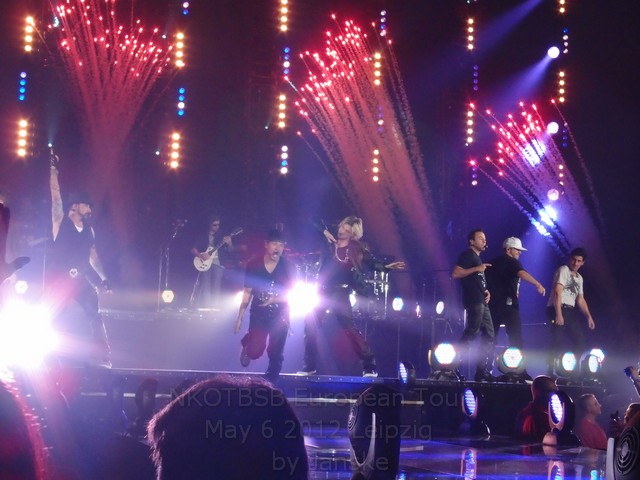 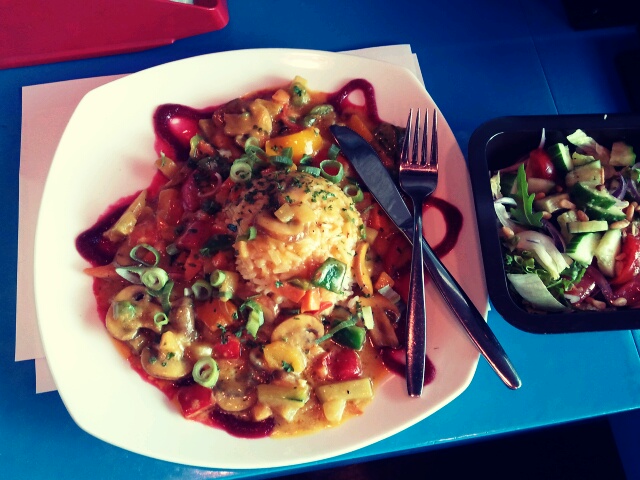 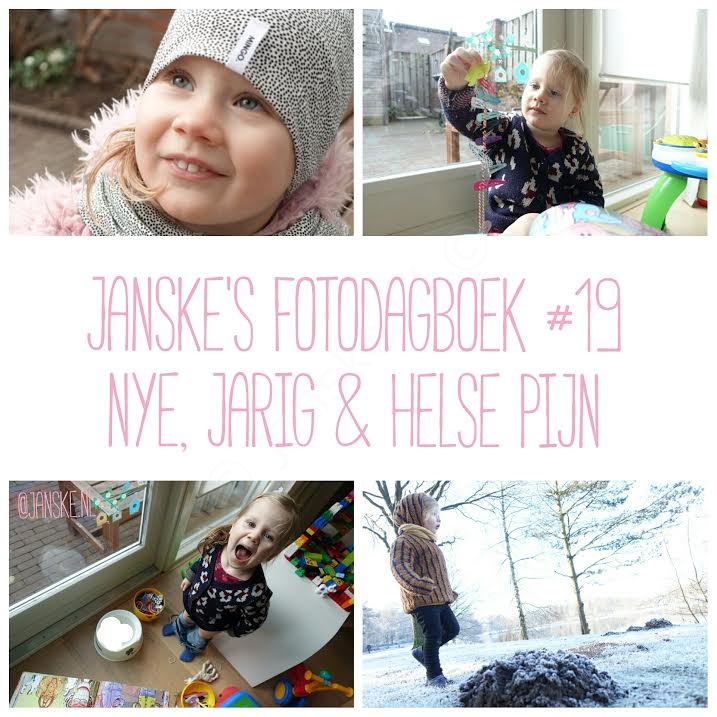